Our Lady of Fatima’s First Apparition 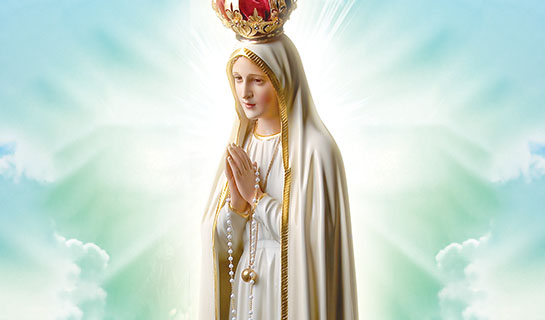 When Our Lady first appeared at Fatima on May 13, 1917, Lucia had just turned 10; Francisco was soon to turn 9; and Jacinta, the youngest of the three shepherds, was a little over 7 years old.

The apparitions of Our Lady usually took place in Cova da Iría, a property of the father of Lucia, located 2.5 km from Fatima. The mother of God appeared near noon, on an oak tree a little more than a meter high.

By some mysterious plan of God, the three children were privileged, but in an unequal way: all three saw Our Lady, but Francis could not hear her; Jacinta saw it and listened, but did not speak to her; Lucia saw and listened to the Blessed Virgin, and also talked with her.

The shepherds were, on that day, 13, playing to build a small stone house around a bush when, suddenly, a very intense light shone.

At first they thought it had been a lightning bolt, but shortly afterwards they saw, on an oak tree, “a Lady, dressed all in white, brighter than the Sun, spreading a light clearer and more intense than a crystal glass filled with water crystalline, pierced by the rays of the most ardent sun. ”

The little ones, surprised, stood very close to the Lady, in the light that enveloped her. Our Lady then began the following conversation with Lucia:

– Do not be afraid. I will not hurt them.

– Where are you from?

– And what do you want from me?

– I came to ask you to come here on the thirteenth day of each month for six months at the same time, and then I will return here a seventh time.

– Yes, also; but he has to pray many Rosaries. Lucia then remembered to ask for two young girls, friends of hers who had recently died:

– She will be in Purgatory until the end of the world.

Our Lady then made an explicit invitation to the little shepherds:

– Do you want to offer God to endure all the sufferings that He wants you to suffer, in an act of reparation for the sins with which He is offended, and supplication for the conversion of sinners?

– Go therefore, you have much to suffer, but the grace of God will be his consolation.

Our Lady still added: “Pray the Rosary every day, to achieve peace for the world and to the end of the war.” Then she rose in a cloud of light and glided away into the eastern sky until she disappeared.