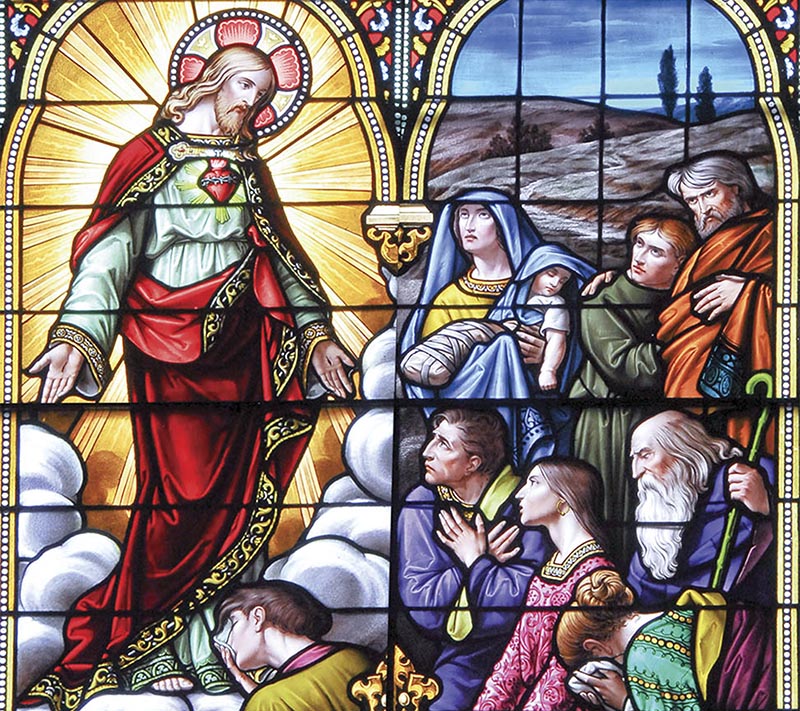 Twenty-five years ago, on the approach of the solemnities of the second centenary of the Blessed Margaret Mary Alacoque’s reception of the Divine command to propagate the worship of the Sacred Heart, many letters from all parts, not merely from private persons but also from Bishops were sent to Pius IX, urging him to consecrate the whole human race to the Most Sacred Heart of Jesus.

It was thought best at the time to postpone the matter in order that a well-considered decision might be arrived at. […] Now, owing to certain new and additional reasons, We consider that the plan is ripe for fulfilment.

Supreme Lord of all things

This world-wide and solemn testimony of allegiance and piety is especially appropriate to Jesus Christ, Head and Supreme Lord of our race. […]

For He who is the Only-begotten Son of God the Father, consubstantial with Him, as “the brightness of His glory and the figure of His substance” (Heb 1:3), has everything in common with the Father, and therefore sovereign power over all things. For which the Son of God thus speaks of Himself through the prophet: “But I am appointed King by Him over Sion, His holy mountain… The Lord said to Me, Thou art my Son, this day have I begotten Thee. Ask of Me and I will give Thee the Gentiles for thy inheritance and the utmost parts of the earth for thy possession” (Ps 2:6-8).

By these words, He declares His power received from God over the whole Church, signified by Mount Sion, and over the rest of the world to its utmost parts. The words, “Thou art my Son,” clearly indicate the foundation of this sovereign power, for by the very fact that He is the Son of the King of all, He is also the heir of all His Father’s power. Hence the words “I will give thee the Gentiles for thy inheritance,” which are similar to those used by Paul the Apostle, “whom He hath appointed heir of all things” (Heb 1: 2).

But we should now give most special consideration to the declarations made by Jesus Christ, not through the Apostles or the Prophets but by His own words. To the Roman Governor who asked Him, “Art Thou a king then?” He answered unhesitatingly, “Thou sayest that I am a King” (Jn 18:37). And the greatness of this power and the boundlessness of His kingdom is still more clearly declared in these words to the Apostles: “All power is given to Me in Heaven and on earth” (Mt 28:18). […]

But this is not all. Christ reigns not only by natural right as the Son of God, but also by acquired right. For He snatched us “from the power of darkness” (Col 1:13), and “gave Himself for the redemption of all” (1 Tim 2:6). Therefore not only Catholics, and those who have duly received Christian baptism, but also all men, individually and collectively, have become to Him “a purchased people” (1 Pt 2:9).

Therefore, St. Augustine rightly comments: “You ask what price He paid? See what He gave and you will understand how much He paid. The price was the Blood of Christ. What could cost so much but the whole world, and all its people? The great price He paid was paid for all.” 1 […]

“My child, give Me your heart”

To this twofold ground of His power and domination He graciously allows us to add our voluntary consecration. Jesus Christ, our God and our Redeemer, possesses all things fully and perfectly; we, on the other hand, are so poor and needy that we have nothing of our own to offer Him as a gift. But yet, in His infinite goodness and love, He in no way objects to our giving and consecrating to Him what is already His, as if it were really our own. Indeed, He not only accepts such an offering, but positively desires and requests it: “My child, give Me your heart.”

We are thus able to be pleasing to Him by the good will and the affection of our soul. For by consecrating ourselves to Him, we not only openly and joyfully acknowledge and accept His authority over us, but we also testify that if what we offer Him were really our own, we would still offer it with our whole heart. […]

Reason of hope for nations

Such an act of consecration, since it can establish or strengthen the bonds which naturally connect public affairs with God, gives to States a hope of better things.

In these latter times […] the authority of sacred and divine law is utterly disregarded, with a view to the exclusion of religion from having any part in public life. This policy ultimately attempts to extinguish the Christian Faith in the people, and, if it were possible, to banish God Himself from the earth.

With men’s minds dominated by such insolent pride, what wonder is it that the greater part of the human race has fallen into such profound disturbances and is buffeted by waves that spare no one from anxiety and peril?

When religion is discarded, it necessarily follows that the surest foundations of the public welfare must give way, whilst God, to inflict on His enemies their deserved punishment, has left them the prey to their own evil desires, so that they give themselves up to their passions and finally wear themselves out by excess of liberty.

Salvation is found in no other name

Hence that abundance of evils which have long taken hold of the world, and which oblige us to seek the aid of Him by whose strength alone they can be driven away. Who can He be but Jesus Christ the Only-begotten Son of God? “For there is no other name under Heaven given to men whereby we must be saved” (Acts 4:12). We must have recourse to Him who is the Way, the Truth and the Life. […]

When the Church, in the days immediately succeeding her institution, was oppressed beneath the yoke of the Caesars, a young Emperor saw in the heavens a cross, which announced and brought about the glorious victory that soon followed. And today, behold another blessed and heavenly token is offered to our sight – the Sacred Heart of Jesus, with a cross rising from it and shining with dazzling splendour amidst flames of love.

In that Sacred Heart all our hopes should be placed, and from it the salvation of men is to be confidently besought.