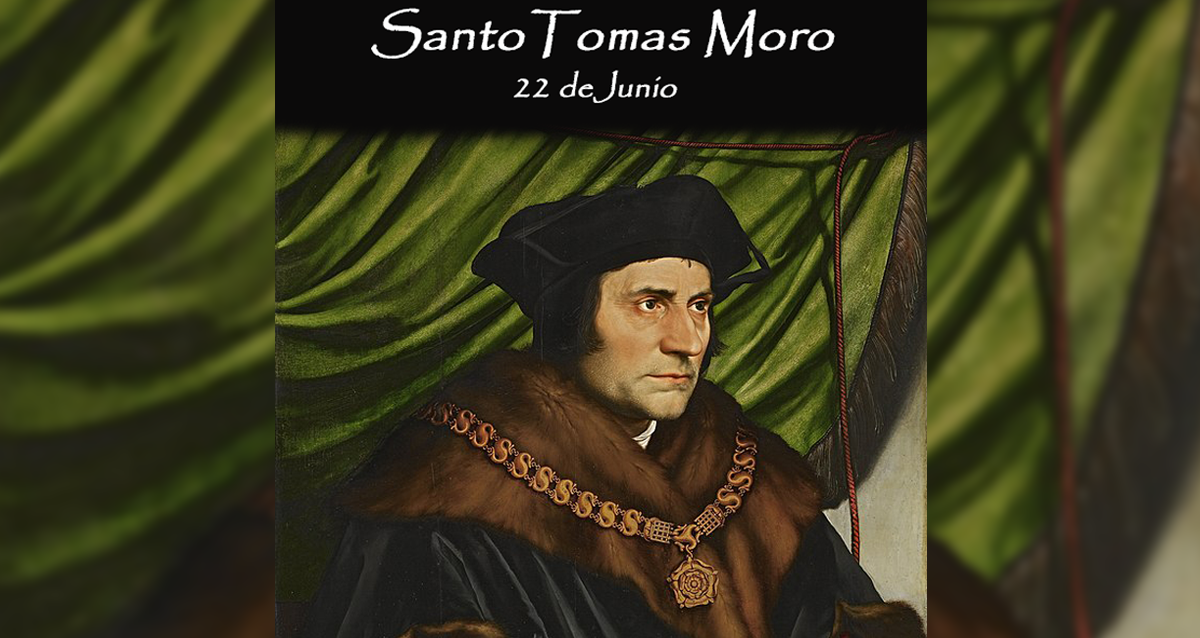 Saint Thomas More is venerated as an imperishable example of moral integrity. And even outside the Church, particularly among those with responsibility for the destinies of peoples, he is acknowledged as a source of inspiration for a political system which has as its supreme goal the service of the human person.

Born in London in 1478 of a respectable family, as a young boy he was placed in the service of the Archbishop of Canterbury, John Morton, Lord Chancellor of the Realm. He then studied law at Oxford and London, while broadening his interests in the spheres of culture, theology and classical literature. He mastered Greek and enjoyed the company and friendship of important figures of Renaissance culture, including Desiderius Erasmus of Rotterdam.

His sincere religious sentiment led him to pursue virtue through the assiduous practice of asceticism. Feeling himself called to marriage, family life and dedication as a layman, in 1505 he married Jane Colt, who bore him four children. Jane died in 1511 and Thomas then married Alice Middleton. Throughout his life he was an affectionate and faithful husband and father, deeply involved in his children’s religious, moral and intellectual education. His house offered a welcome to his children’s spouses and his grandchildren, and was always open to his many young friends in search of the truth or of their own calling in life. Family life also gave him ample opportunity for prayer in common and lectio divina, as well as for happy and wholesome relaxation. Thomas attended daily Mass in the parish church, but the austere penances which he practiced were known only to his immediate family.

He was elected to Parliament for the first time in 1504 under King Henry VII. The latter’s successor Henry VIII renewed his mandate in 1510, and even made him the Crown’s representative in the capital. This launched him on a prominent career in public administration. Having been made a member of the King’s Council, presiding judge of an important tribunal, deputy treasurer and a knight, in 1523 he became Speaker of the House of Commons.

In 1529 at a time of political and economic crisis in the country he was appointed by the King to the post of Lord Chancellor. The first layman to occupy this position, Thomas faced an extremely difficult period, as he sought to serve King and country. In fidelity to his principles, he concentrated on promoting justice and restraining the harmful influence of those who advanced their own interests at the expense of the weak. In 1532, not wishing to support Henry VIII’s intention to take control of the Church in England, he resigned. He withdrew from public life, resigning himself to suffering poverty with his family and being deserted by many people who, in the moment of trial, proved to be false friends.

Given his inflexible firmness in rejecting any compromise with his own conscience, in 1534 the King had him imprisoned in the Tower of London, where he was subjected to various kinds of psychological pressure. Thomas More did not allow himself to waver, and he refused to take the oath requested of him, since this would have involved accepting a political and ecclesiastical arrangement that prepared the way for uncontrolled despotism. Condemned by the Court, he was beheaded on July 6th, 1535.

With the passing of the centuries discrimination against the Church diminished. In 1850 the English Catholic Hierarchy was re-established. This made it possible to initiate the causes of many martyrs. Thomas More, together with 53 other martyrs, including Bishop John Fisher, was beatified by Pope Leo XIII in 1886. And with John Fisher, he was canonized by Pius XI in 1935, on the fourth centenary of his martyrdom.

Saint Thomas More, who distinguished himself by his constant fidelity to legitimate authority and institutions precisely in his intention to serve not power but the supreme ideal of justice. His life teaches us that government is above all an exercise of virtue. Unwavering in this rigorous moral stance, this English statesman placed his own public activity at the service of the person, especially if that person was weak or poor; he dealt with social controversies with a superb sense of fairness; he was vigorously committed to favouring and defending the family; he supported the all-round education of the young. His profound detachment from honours and wealth, his serene and joyful humility, his balanced knowledge of human nature and of the vanity of success, his certainty of judgement rooted in faith: these all gave him that confident inner strength that sustained him in adversity and in the face of death. His sanctity shone forth in his martyrdom, but it had been prepared by an entire life of work devoted to God and neighbour.

The unity of life of the lay faithful is of the greatest importance: indeed they must be sanctified in everyday professional and social life. Therefore, to respond to their vocation, the lay faithful must see their daily activities as an occasion to join themselves to God, fulfil his will, serve other people and lead them to communion with God in Christ” (Christifideles Laici. No. 17).

This harmony between the natural and the supernatural is perhaps the element which more than any other defines the personality of this great English statesman: he lived his intense public life with a simple humility marked by good humour, even at the moment of his execution.

Saint Thomas More, Pray for us.