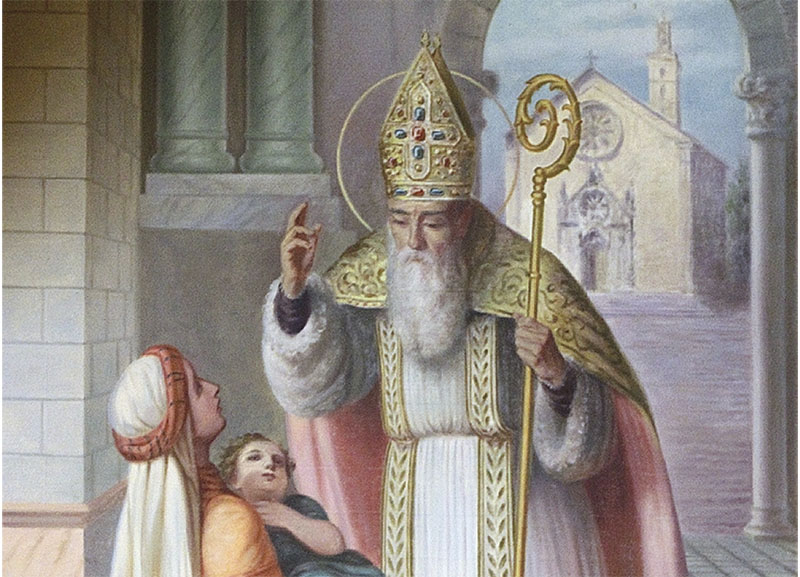 After the carols that characterize the long-awaited Christmas Eve, so full of wonder for innocent souls, and in the midst of the atmosphere of kindness and expectation that marks this time of year, something unusual happens in homes…

When everyone is sure to be immersed in a deep sleep, down the chimney of the house or through some other entrance that no one has discovered to this day, a certain personage makes his arrival. He comes flying in from distant lands, with reindeer pulling his characteristic coach-like sleigh, a means of transport in which every child has eagerly taken a ride, even if just in their dreams…

Now, what is he up to, this mysterious visitor – curiously, never mistaken for a thief – who arrives “late” on that night before Christmas, while everyone is fast asleep?

Always sporting a long, white beard, he comes with “surprises” hidden in a large red sack: gifts of every kind, which he distributes with abundance and simplicity, like someone who wishes to please others without expecting anything in return.

This generous character is known by some as Father Christmas, and by others as Santa Claus. Both names refer to the same person, whose fame is truly worldwide and endures to this day, more alive than ever, giving us the impression that it will be eternal!

Defender of the Faith and generous father

In truth, this Christmas figure is not as imaginary as he appears. He dates back to a man who was born in the third century in Asia Minor, – so not in the North Pole! – more precisely where Turkey is located today.

Nicholas was born into a wealthy family in Lycia, a Roman province located by the Mediterranean Sea. On account of the virtues that shone in his soul, he was elected Bishop of Myra, one of the most important cities in the region, and he carried out his ministry with great dedication and goodness.

Always zealous for sound doctrine, he took severe measures against paganism and relentlessly fought heresies. But it was his works of charity towards his neighbour which made him famous throughout the Christian world.

Miracles worked while he was alive

One of these facts became famous during his life, and earned him the devotion of the faithful and a strong reputation for holiness.

At that time there was in Myra a judge who, through the persuasive power of bribery, condemned three innocent men to death. At the moment of their execution,the good Nicholas appeared on the scene, wrenched the weapon from the executioner’s hands, reprimanded the iniquitous judge and released the condemned men.

Shortly after, another similar event occurred in Constantinople: three officers were wrongly convicted. Pitiful secular justice, so often governed by the infamy of ambition instead of love for the Truth! But these accused had witnessed the scene narrated above and did not hesitate: full of devotion to the imposing and paternal figure of St. Nicholas, they immediately began to pray, beseeching him to save them too, even if from afar… And behold, that very night, Emperor Constantine dreamed that he saw the Saint, who ordered him to free those unfortunate men, for they were innocent!

The next day, Constantine summoned the three condemned men and, questioning them, learned that they had invoked “Nicholas of Myra”, asking for his help. Deeply moved, the emperor released them.

St. Nicholas died on December 6, in the middle of the fourth century. The virtues he practised elevated him to a high degree of holiness, and his miracles post mortem served to exalt him further still. He thus quickly became one of the most well-known Saints of the Catholic Church.

his most famous title has always been that of “patron of children”. And this is mainly due to two episodes. The first happened when the holy bishop learned that the father of three girls was in serious financial trouble and would not be able to pay the necessary dowry for the marriage of his daughters, which threatened to reduce them to a wayward life…

Full of compassion for the members of that family, Nicholas went to the house where they lived and, hidden under cover of night, tossed a little bag full of good coins down the chimney in order to help them. He did so three times. Some versions of the story go so far as to say that one of these precious parcels fell precisely into the stocking of one of the young women, which was hanging in the chimney to dry…

The second fact consists of a magnificent miracle worked during St. Nicholas’ lifetime: the resurrection of three children who had been murdered! This was the event that finally consecrated him officially as patron and protector of children.

Thus in several countries the pious tradition of giving gifts to children every December 6 in honour of St. Nicholas was established.

How was he transformed into Father Christmas?

Dear reader, after learning of these wonders, it is possible that the following question arises in your mind:But what does Santa Claus have to do with this description of St. Nicholas? How did the virtuous Bishop of Myra become an inhabitant of the North Pole who, in just one night, gives Christmas presents to all the children of the world?

The transformation of the Saint into a chimera has its most remote origins in the Protestant Reformation. Just as the Emperor Diocletian, many centuries ago, tried to do away with the man named Nicholas, the reformers sought to erase this hero’s memory from history and, above all, from the hearts of the faithful.

Nevertheless, devotion to him was so deep-rooted in Europe that he did not disappear completely. The figure of St. Nicholas was conflated with mythical beings, some of them quite disagreeable and aggressive, giving rise to characters such as the Dutch Sinterklaas, who made his way to the New World with the immigrants from this nation.

Throughout the 19th century, he gradually took on his present physiognomy in New York. In 1822, the writer Clement Clarke Moore wrote a poem entitled A Visit from Saint Nicholas, in which he presented a character coming from the North in a sleigh pulled by flying reindeer.

Years later, in 1863, the political cartoonist Thomas Nast drew a picture for Harper’s Weekly magazine, in which he portrayed the characteristics so familiar today: a burly elderly man, smiling from behind a full white beard.

Since then, several companies have used this Christmas figure as a means of advertising, including Coca-Cola, which was responsible for definitively establishing his red and white outfit in 1920.

Let us celebrate Christmas with an authentic spirit of faith!

As can be seen, Santa Claus is thus a distortion of the holy and generous Bishop of Myra, patron of navigators, children and of many places.

That virtuous man who shone by his charity and knew how to proclaim the true Christian physiognomy of Christmas was replaced by the secular Father Christmas, whom we know today transformed into a propagator of consumerism. For many people in today’s world, Santa Claus is at the centre of all the commemorations, taking the place of the Child Jesus, the cause and joy of Christmas! …

Therefore, much more than mere historical nomenclature, one could say that these characters – Father Christmas and St. Nicholas – symbolize, in the face of the sublime fact of the birth of the Divine Infant, two opposing mentalities: one is that of those who, with their horizons set in this earthly world, “fly” through the air of frivolous fantasies presented by consumerism; the other is that of those who, with joy and faith, prepare their souls to receive at Christmas, not only the kind Bishop of Myra with his gifts, but the God-Man himself!

Let us invoke the intercession of St. Nicholas, so that this Christmas he may grant us the spiritual gifts our souls need, so that, like him, we may be generous, repaying by a pure life all the love that emanates from the tiny Heart of the Child God for each one of us.