The Birth of the Blessed Virgin Mary 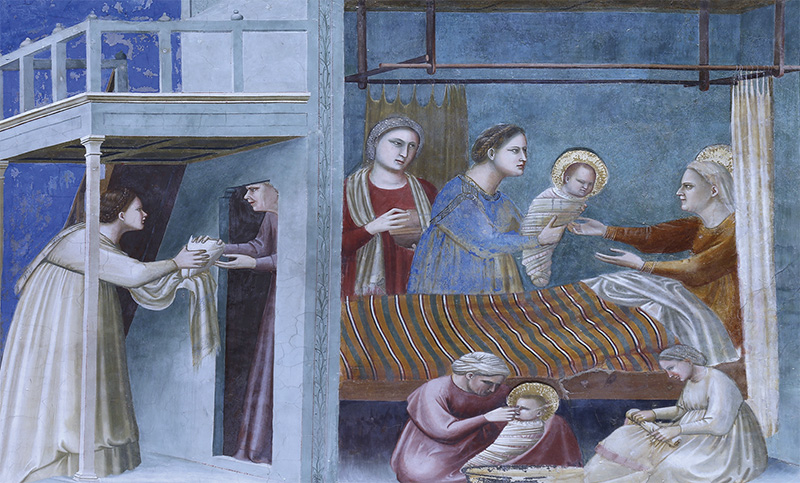 The Feast of the Nativity of Mary - September 8th

The birth of Our Lady brought to humanity something hitherto unknown: a creature free of any stain, a lily of incomparable beauty that was to gladden the angelic choirs and the whole earth. In the midst of the exile of the corrupt human race, an immaculate being appeared, conceived without original sin.

She brought with Her all the natural riches befitting a woman. God gave her a most precious personality and her presence among men represented, also on this account, a truly incalculable treasure.

Now, if we add to the natural gifts the immeasurable treasures of grace that accompanied Her – the greatest ever granted to anyone by Our Lord God – we can gather the enormous significance of her advent in the world. Sunrise is a pale reality in comparison with the resplendent dawn signified by the appearance of Mary Most Holy on this earth!

The most solemn enthronement of a king or a queen, or the natural phenomena of the greatest magnitude are as nothing compared to the birth of the Virgin. At that blessed moment, certainly hailed by the joy of all the Angels of Heaven, we may speculate that upright souls scattered throughout the world felt an unusual surge of jubilation. And this sentiment could well be expressed by a paraphrase of Job’s words:

“Blessed the day that saw Our Lady’s birth, blessed are the stars that looked upon Her when She was little, blessed is the moment when the virginal creature destined to be the Mother of the Saviour came into the world!”

Her coming into the world was the beginning of our redemption

If it is possible to say that the redemption of humanity began with the birth of Our Lord Jesus Christ, the same can be said, respecting due proportions, regarding the Nativity of Our Lady. For everything that the Saviour brought us began with the One who would give Him to the world.

The hopes for salvation, indulgence, reconciliation, pardon and mercy that were opened to humanity on that blessed day when Mary was born in this land of exile are thus understood. A happy and magnificent moment, it marked the beginning of the unfathomably perfect, pure and faithful existence of what was destined to be the greatest glory of all time for the human race, inferior only to Our Lord Jesus Christ, the Incarnate Word of God.

Many theologians maintain that, having been conceived without original sin, Our Lady was endowed with the use of reason from the very first moment of her being. In the womb of St. Anne, where She lived as in a tabernacle, She would therefore already have had the loftiest and most sublime thoughts.

A parallel can be drawn with what Sacred Scripture tells of St. John the Baptist. He, who had been conceived in original sin, when he heard the voice of Our Lady greeting St. Elizabeth, trembled with joy in his mother’s womb.

Therefore, it is possible that the Blessed Virgin, with the sublime knowledge She received by the grace of God, began at once, in her mother’s womb, to ask for the coming of the Messiah, and that in her soul She formed the lofty intention of one day becoming the servant of the Redeemer’s Mother.

In any case, her mere presence on earth was a source of grace for those who approached Her and St. Anne, and it would be even more so after her birth. If from Our Lord’s tunic, as the Gospel tells us, healing powers radiated to those who touched it, how much more from the Mother of God, Chosen Vessel!

Newly-born, and already victorious over the devil

If the coming of the Saviour defeated evil in mankind, the Nativity of the Blessed Virgin was accompanied with the light that marked the beginning of the victory of good and the crushing of the devil. Even he realized that something of his sceptre had been irreparably broken. Our Lady was beginning to influence the destiny of humanity.

The world of that time had sunken into the most radical paganism, in a situation very similar to that of our days: vice reigned, the most diverse forms of idolatry dominated the earth, and decadence threatened the Jewish religion itself, a harbinger of Catholicism. Everywhere, error and the devil were victorious.

But at the moment decreed by God in His mercy, He demolished the wall of evil, bringing Our Lady into the world. From the root of Jesse blossomed the divine lily, Our Lord Jesus Christ. With His birth began the irreversible destruction of satan’s reign.

The “birth” of Mary in our spiritual life

Our Lady’s first triumph over evil brings to mind another reflection.

How often in our spiritual life we find ourselves immersed in the struggle against temptations, writhing and reeling in difficulties! And we have no idea when the blessed day will come when a great grace, an outstanding favour, will put an end to our torments and struggles, finally affording us great progress in the  practice of virtue.

At that moment there will be a kind of birth of the Blessed Virgin in our souls. She will arise amid the darkness of the greatest trials, overcoming at the very outset the difficulties that we have been facing. She will rise up like a dawn in our existence, representing in our spiritual life a role hitherto unknown to us.

This thought should fill us with joy and hope, giving us the certainty that Our Lady will never abandon us. In the most difficult hours, She, as it were, bursts into our midst, solving our problems, alleviating our sorrows and giving us the combativeness and courage necessary to fulfil our duty completely, however arduous it may be. The greatest consolation She brings us is precisely this strengthening of our will, which allows us to undertake the fight against the enemies of our salvation.

Dawn in the storyline of history

Our Lady also gives us the strength to become zealous children of the Church and defenders of the Catholic religion. There is historical evidence to affirm that all the great souls who have fought against the various heresies over the centuries were especially raised up by Her. This is what the coat of arms of the Claretians so beautifully suggests. In addition to the Immaculate Heart of Mary, it also bears St. Michael the Archangel and the motto: “Her children rose up and called Her Blessed.”

Is not this rising up of the Blessed Virgin’s devotees to glorify Her another a manner of her being born, like a magnificent dawn in the storyline of history?

Thus, the true children of Our Lady must desire and ask of Her the grace to be indomitable and implacable against the devil and his henchmen who, in our days, seek to defile the glory of the immortal Church of Christ. ◊