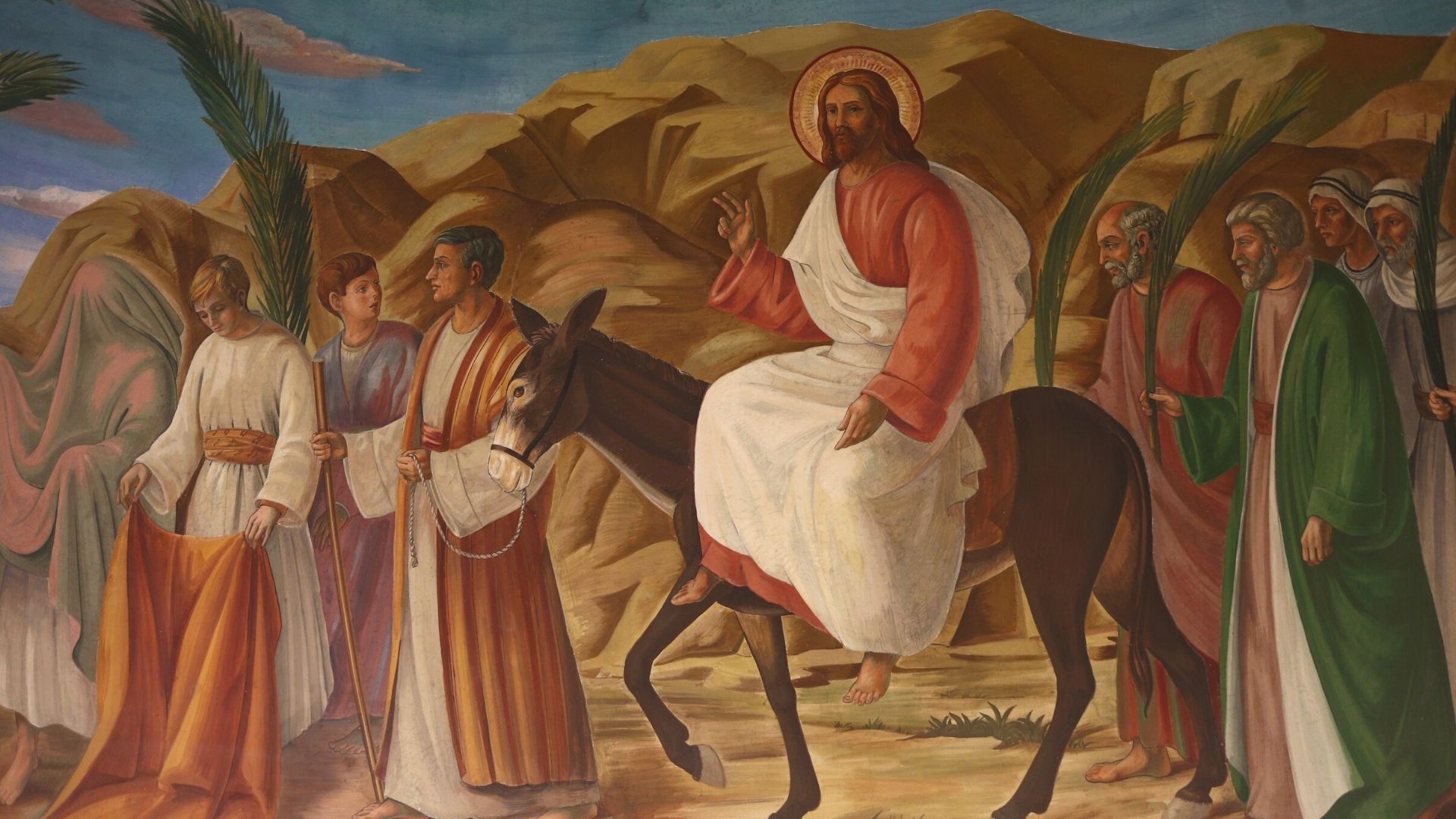 Palm Sunday, the beginning of sorrows

With the Incarnation of the Word the work of darkness met its ruin. And the confrontation between good and evil will find its archetype, until the end of time, in the implacable fight of the Lord against the scribes and the Pharisees, widely narrated by all the evangelists. The damned vein of evil came face to face with a Man who founded an Institution to combat it, the Man God before whom he was forced to hear the most forceful and penetrating truths, to the point of being ripped off in the eyes of all the people the mask of hypocrisy.

In the Liturgy of Palm Sunday we will witness the outcome of that fight. On that day the Church commemorates, at the same time, the joys of the triumphal entry of Jesus Christ into Jerusalem and the beginning of his Via Crucis, with the proclamation of the Passion in the Gospel of the Mass. Thus opens Holy Week, perhaps the most captivating period of the Liturgical Year, during which the most important celebrations follow one another, inviting us to consider with special fervor the events that constitute the core of our Redemption.

Among the numerous miracles performed by the divine Master, none produced such a stir in Israel as that of the resurrection of Lazarus (cf. Jn 11, 1-44). At a simple command, the four-day dead man walked out of the tomb, in perfect health. As the divine power of Jesus was evidenced in such a great way, the prodigy caused a strong outbreak of popular fervor and many Jews began to believe in Him. On the other hand, this fact exasperated the pontiffs and Pharisees to the extreme. The Sanhedrin met to deliberate on how to stop the growing fame of the Lord and “that day they decided to kill him” (Jn 11, 53).

The Redeemer, who knew everything, had already learned of this official decision of the Sanhedrin when he undertook his journey back to the Holy City, on the eve of the Passover commemorations. Along the way he warned his disciples about it, announcing to them the Passion for the third time: “Look, we are going up to Jerusalem, and the Son of man is going to be handed over to the chief priests and the scribes; They will condemn him to death and hand him over to the Gentiles” (Mk 10, 33).

However, nothing prevented the influx of people who came to meet him and happened to follow him on the way. Most of them were Israelites who were also on their way to the Temple to celebrate the Passover, so that the closer they got to the city, the greater the number of those who accompanied them. Saint Matthew, for example, records that leaving Jericho “a great crowd followed him” (20, 29) and Saint John mentions another “crowd of Jews” (12, 9) that concentrated in Bethany when they learned that Jesus had arrived there.

All these people went with Him to Jerusalem, so that “it may well be assumed that the procession formed several hundred and even thousands of people”,6 says Fillion. Precisely at that point of the route, in the vicinity of Betania and Betfagé, is where the passage of Saint Luke reflected in the Gospel of the Palm Sunday Procession of Year C begins.

The praises began once the Lord climbed on the back of a jumentillo, still on the road. As he passed, the people spread their cloaks on the ground and this improvised carpet was completed with tree branches (cf. Mt 21, 8; Mk 11, 8). When the Temple could already be seen —which corresponds to the vicinity of “the descent of the Mount of Olives”, as Saint Luke specifies—, the massive procession bursts into exclamations and shouts of joy: “Blessed is the King who comes in name of the Lord! Peace in heaven and glory in the highest”. This movement stirred up the city, which overflowed with pilgrims from all the regions of Palestine, who with palm branches went out to meet Jesus and joined the caravan to also acclaim him (cf. Jn 12, 12-13).

This triumphal procession —but how modest for one who is the King and Creator of the universe!— literally fulfilled the messianic prophecy of Zechariah: “Leap for joy, Zion; rejoice, Jerusalem! Look, your king is coming, just and triumphant, poor and mounted on a donkey, on a donkey’s colt” (9, 9).

Entire conformity with the will of the Father

Until then the Lord had always avoided any ostensive homage to his royalty, imposing silence on those who recognized in him the Savior. When the people wanted to acclaim him king after the first multiplication of the loaves, he avoided it by withdrawing to the mountain alone (cf. Jn 6, 15). But when he entered Jerusalem, on the contrary, he accepted the honors and applause with total naturalness. This attitude, in addition to allowing the people benefited by Him to express their gratitude in a formal way, also had the Passion as its objective, since it was necessary that it be made clear and attested by the people themselves that the Crucified One was the descendant of David par excellence, the expected Messiah.

We see highlighted here the full conformity of Jesus with the will of the Father. When he was asked for an eclipse of his person, the divine Redeemer fully embraced him: he was born in a grotto in little Bethlehem and received only the adoration of the shepherds and the Magi who came from distant lands. Jerusalem’s only reaction to the news of his birth was shock (cf. Mt 2,3), and none of its inhabitants went out in search of the newborn king of the Jews to pay him homage.

However, when the time was right for men to glorify him, he welcomed with benevolence the shouts that proclaimed him King of Israel, just as he had accepted, for years, to be called “the son of the carpenter” (Mt 13, 55) .

In response to the insolent interpellation of the Pharisees who asked him to censure their acclaimers, Jesus made it clear to them that this triumph was the fulfillment of a divine plan, which would be fulfilled even if men refused to praise him: “I tell you that If they are silent, the stones will cry out”.

Triumph that heralds the Passion

A detail of the liturgical ceremony indicates another aspect of Palm Sunday, without which it would not be possible for us to understand its deepest meaning: the priest celebrates dressed in red vestments, the color proper to the commemoration of the martyrs.

Due to his divine personality, everything is present to the Lord, both past and future. Consequently, he saw that in a short time the cry of the people would once again resound through the streets of Jerusalem, but they would be very different cries from those that had recognized him as the Son of David at that time. Before Pilate, the populace shouted for his crucifixion and the release of a common bandit, Barabbas.

The Catholic painters who reproduced the scene represent the Lord receiving this homage with a certain good degree, but with a background of sadness and at the same time of severity, because He understood what that was empty, and that the people who acclaimed him, without thinking about it, recognized their own guilt. […] He Parades good and sad; he knows what awaits him. Jesus’ triumph in Jerusalem was but the foreshadowing of his martyrdom on the Cross. The evangelists, always very synthetic, had special diligence in recording the Passion of Christ, an event of unparalleled importance in history. For this reason, the Gospel of this Sunday’s Mass exceeds the usual length, which makes it impossible to comment on each of its verses in the meager space of an article. So, let us make a reflection that puts us in the proper perspective to contemplate the wonders that the Liturgy of Palm Sunday offers us, with a view to obtaining the best fruits for our spiritual life.