Our Lady of Fatima’s Sixth Apparition 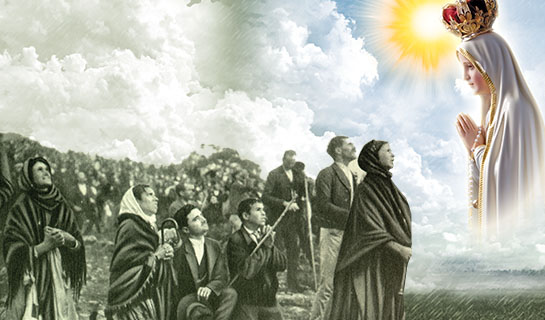 The crowd prayed the rosary when, at the usual time, Our Lady appeared on the oak:
– What does Your Grace want of me?

– I want to tell you to make a chapel here in my honor; that I am the Lady of the Rosary; may they always continue praying the Rosary every day. The war will end, and the military will soon return to their homes.

– I had many things to ask you: to heal the sicks and to convert sinners, etc…

– Some yes, others no. It is necessary that they amend themselves; they need to pray for forgiveness of their sins. Do not offend God Our Lord, who is already very offended. 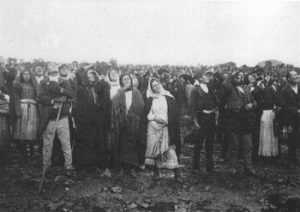 At that moment, she opened his hands and made them reflect on the Sun, and began to rise, disappearing into the sky. As she arose, the reflection of its own light was projected on the sun.

Lucia saw Our Lord on the way to the Calvary as the vision dissapeared and the Virgin with other people. Once again Our Lord drew with his hand a sign of the Cross, blessing the crowd. 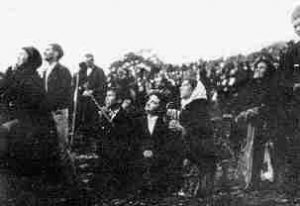 Finally, in front to the eyes of Lucia, Our Lady of Carmel appeared with the Baby Jesus around her neck, with a sovereign and glorious aspect.

The three visions thus recalled the joyful, sorrowful and glorious mysteries of the Holy Rosary. The miracle of the sun, while these scenes were happening, astonished the crowd whom attended the great miracle promised by the Virgin, so that every one would believe.

At the moment she arose from the oak and moved toward the east, the sun appeared among the clouds, like a large silver disc, shining with unusual brilliance, but without blinding the view. And then it began to spin rapidly, vertiginously. Then it stopped for a while and then turned rapidly on itself, in the manner of an immense ball of fire. Her lips turned reddened at certain height, and the Astro-King spreaded flames of fire in a frightening swirl across the sky. The light of those flames was reflected on the faces of the crowd, on the trees, on all objects, which showed colors and very diverse tones, greenish, bluish, reddish, orange, etc. 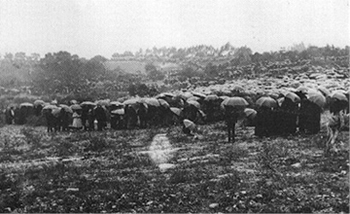 On October 13th, a big crowd went to Cova da Iria; 50 to 70 thousand people. Most had arrived the night before and there the night had passed. It was pouring down raining and the ground had been transformed into an big mud.

Three times the sun, turning madly before the eyes of all, rushed in zigzag on the ground, the crowd was terrified, and asked God for mercy and for the forgiveness for their sins.

The phenomenon lasted about 10 minutes. Everyone saw it, nobody dares to question it, not even the freethinkers and agnostics who had come there out of curiosity or to mock the popular credulity. 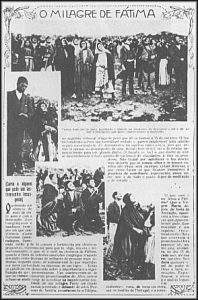 It was not, as they later imagined people without faith, of a phenomenon of suggestion or collective excitement, because it was seen up to 40 km away, by many people who were outside the place of the apparitions and therefore outside the area of influence of a supposed suggestion or excitement.

A frightful detail was noticed by many people: their clothes, that were soaked by the rain at the beginning of the phenomenon, had dried prodigiously minutes later.