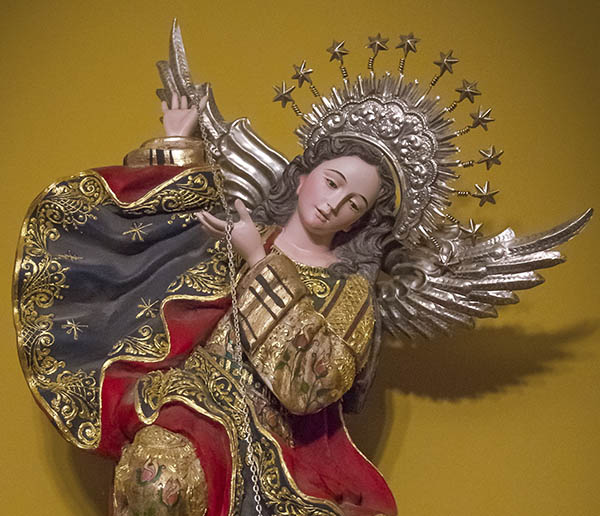 From all eternity ineffable God chose and prepared for His Only-begotten Son a Mother in whom the Son of God would become incarnate and from whom, in the blessed fullness of time, He would be born into this world. Above all creatures God did so love Her that the Father was truly well pleased with Her with singular delight. Therefore, God did so wondrously endow Her far above all the Angels and all the Saints with an abundance of all heavenly gifts poured from the treasury of His divinity that this Mother, always absolutely free of all stain of sin, most beautiful and perfect, would possess that fullness of innocence and sanctity of which, under God, one cannot imagine anything greater, and which, outside of God, no mind can possibly comprehend.

And indeed it was wholly fitting that so wonderful a Mother should be ever resplendent with the glory of most sublime holiness and so completely free from all taint of original sin that She would utterly triumph over the ancient serpent.

The Father willed to give to Her His Only-begotten Son – the Son whom, equal to the Father and begotten by Him, the Father loves as himself – and to give this Son in such a way that He would be the one and the same common Son of God the Father and of the Blessed Virgin Mary. It was She whom the Son himself chose to make His Mother and it was from Her that the Holy Spirit willed and brought it about that the Son, from whom He himself proceeds, should be conceived and born. […]

This doctrine always existed in the Church

And indeed, illustrious documents of venerable antiquity, of both the Eastern and the Western Church, undeniably testify that this doctrine of the Immaculate Conception of the most Blessed Virgin, which was daily more and more splendidly explained, stated and confirmed by the highest authority, teaching, zeal, knowledge, and wisdom of the Church, and which was disseminated among all peoples and nations of the Catholic world in a marvellous manner, always existed in the Church as a doctrine that has been received from our ancestors, and that has been stamped with the character of revealed doctrine. This is corroborated by the testimonies of antiquity, of both the Eastern and the Western Church.

For the Church of Christ, watchful guardian that she is, and defender of the dogmas deposited with her, never changes anything, never diminishes anything, never adds anything to them; but with all diligence she treats the ancient documents faithfully and wisely; if they really are of ancient origin and if the faith of the Fathers has transmitted them, she strives to investigate and explain them in such a way that the ancient dogmas of heavenly doctrine will be made evident and clear, but will retain their full, integral, and proper nature, and will have grown only within their own genus – that is, within the same dogma, in the same sense and the same doctrine.

She triumphantly crushed the head of the devil!

The Fathers and writers of the Church, well versed in the heavenly Scriptures, strove to preach and teach in many wonderful ways the Virgin’s supreme sanctity, dignity, and immunity from all stain of sin, and her renowned victory over the cruel enemy of the human race. This they did in the books they wrote to explain the Scriptures, to vindicate the dogmas, and to instruct the faithful.

These ecclesiastical writers in quoting the words by which at the beginning of the world God announced His merciful remedies prepared for the regeneration of mankind – words by which He crushed the audacity of the deceitful serpent and wondrously raised up the hope of our race, saying, “I will put enmities between you and the woman, between your seed and her seed”(Gn 3:15) – taught that by this divine prophecy the merciful Redeemer of mankind, Jesus Christ, the Only-begotten Son of God, was clearly foretold: That His most Blessed Mother, the Virgin Mary, was prophetically indicated; and, at the same time, the very enmity of both against the evil one was significantly expressed.

Hence, just as Christ, the Mediator between God and man, upon assuming human nature, annulled the decree of condemnation that stood against us, and fastened it triumphantly to the Cross, so the Most Holy Virgin, united with Him by a most intimate and indissoluble bond, and waging, with Him and through Him, eternal enmities against the evil serpent, triumphantly crushed his head with her immaculate foot. […] 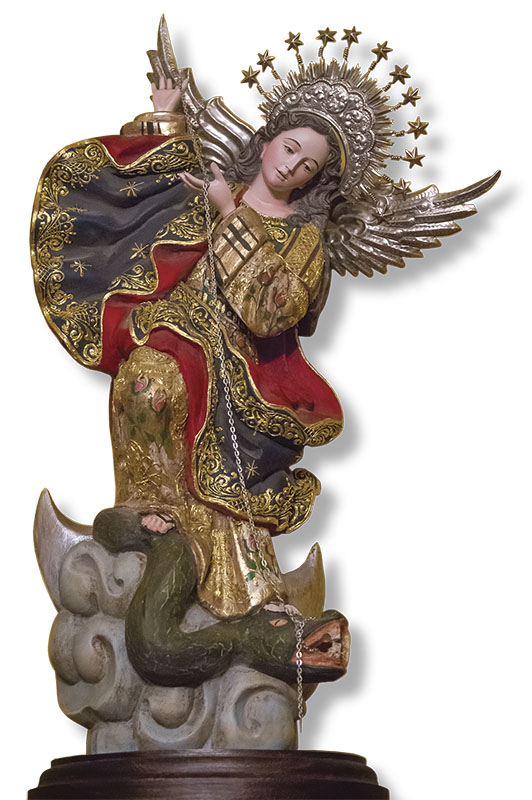 Doctrine that inspires piety and love

It is no wonder, then, that this doctrine of the Immaculate Conception of the Virgin Mother of God, which, as the Fathers discerned, was recorded in the Divine Scriptures; which was handed down in so many of their most important writings; which was expressed and celebrated in so many illustrious monuments of venerable antiquity; has been proposed and confirmed by the official and authoritative teaching of the Church.

Nor can there be any surprise that this doctrine has inspired such piety and love in the pastors and in the faithful, and that they glory in professing it in an ever more splendid manner, or that nothing is dearer and more pleasing to them than to venerate, invoke, and proclaim everywhere with most ardent affection the Virgin Mother of God, conceived without original sin. […]

To be believed firmly and constantly by all the faithful

Wherefore, in humility and fasting, we unceasingly offered our private prayers as well as the public prayers of the Church to God the Father through His Son that He would deign to direct and strengthen our mind by the power of the Holy Spirit. In like manner did we implore the help of the entire heavenly host as we ardently invoked the Paraclete. Accordingly, by the inspiration of the Holy Spirit, for the honour of the Holy and undivided Trinity, for the glory and adornment of the Virgin Mother of God, for the exaltation of the Catholic Faith, and for the furtherance of the Catholic religion, by the authority of Jesus Christ Our Lord, of the Blessed Apostles Peter and Paul, and by our own: We declare, pronounce, and define that the doctrine which holds that the most Blessed Virgin Mary, in the first instance of her conception, by a singular grace and privilege granted by Almighty God, in view of the merits of Jesus Christ, the Saviour of the human race, was preserved free from all stain of original sin, is a doctrine revealed by God and therefore to be believed firmly and constantly by all the faithful.

Hence, if anyone shall dare – which God forbid! – to think otherwise than as has been defined by us, let him know and understand that he is condemned by his own judgment; that he has suffered shipwreck in the Faith; that he has separated from the unity of the Church; and that, furthermore, by his own action he ipso facto incurs the penalties established by law if he should dare to express in words or writing or by any other outward means the errors he thinks in his heart.

Our mouth joyfully opens and speaks with jubilation.

We give, and we shall continue to give, the humblest and deepest thanks to Jesus Christ, Our Lord, because through His singular grace He has granted to us, unworthy though we be, to decree and offer this honour and glory and praise to His Most Holy Mother.