The Solemnity of the Most Holy Trinity 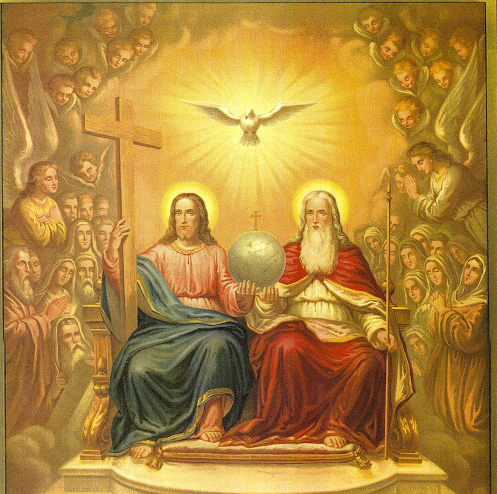 The Holy Trinity is a dogma. A dogma that proclaims the essential truth of the mystery of the “unity and trinity of God”: one God in three different Persons: Father, Son and Holy Spirit. It’s a mystery. Therefore, it is difficult to interpret and impossible to assimilate due to human limitations.

“Mystery” does not mean that something is non-existent or that it does not happen, “mystery”, it is only something that our intelligence is not able to comprehend entirely.

Trying to understand a mystery 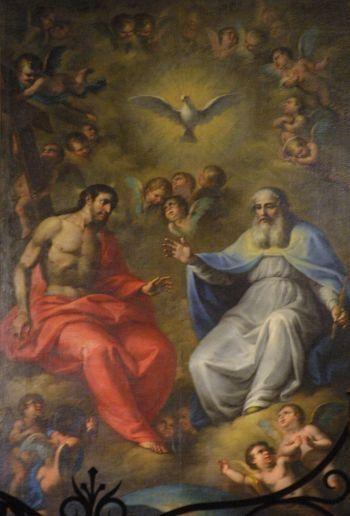 This dogma is called by the doctors of the Church “the substance of the New Testament,” that is to say, the greatest of all mysteries, since it is the fountain and origin of them all. In order to know and contemplate this mystery, the angels were created in Heaven and men upon earth. In order to teach more fully this mystery, which was but foreshadowed in the Old Testament, God Himself came down from the angels unto men: “No man hath seen God at any time; the only begotten Son, who is in the bosom of the Father, He hath declared Him”

Whosoever then writes or speaks of the Trinity must keep before His eyes the prudent warning of the Angelic Doctor: “When we speak of the Trinity, we must do so with caution and modesty, for, as St. Augustine saith, nowhere else are more dangerous errors made, or is research more difficult, or discovery more fruitful”

The danger that arises is lest the Divine Persons be confounded one with the other in faith or worship, or lest the one Nature in them be separated: for “This is the Catholic Faith, that we should adore one God in Trinity and Trinity in Unity.”

Saint Augustine, great theologian and doctor of the Church, tried to understand this ineffable mystery entirely. Absorbed and meditative, on one occasion, he was walking on the beach asking God for the enlightenment to be able to unravel this holy enigma. It is well known what happened: he found a child playing in the sand.

The boy made a short trip with a glass in his hand, repeatedly filled it with seawater and poured it into a small hole made in the sand. Curious, Augustine asked the boy what he wanted to achieve with this. The boy replied that he wanted to place all the water in the sea inside that hole. The saint explained that that would be impossible. The boy then told him: “It is much easier for the ocean to be transferred to this small hole than for the mystery of the Holy Trinity to be understood.” And the boy disappeared: he was an angel.

Augustine understood the lesson: He concluded that the human mind is extremely limited in order to understand the whole dimension of God. No matter how hard he tries, man will never be able to understand this greatness by his own strength or by his reasoning. We will only fully understand God in eternity, when we meet in Heaven with the Father, the Son and the Holy Spirit.

The Holy Spirit and Jesus Christ

Through the work of the Divine Spirit took place not only the conception of Christ, but also the sanctification of his soul, called anointing in the Sacred Books, and this is how all his actions were carried out under the influence of the same Spirit, who also cooperated in a special way to his sacrifice, according to the phrase of St. Paul: “Christ, through the Holy Spirit, offered himself as an innocent host to God.”

Considering this, no one can be surprised that all the gifts of the Holy Ghost inundated the soul of Christ. In Him resided the absolute fullness of grace, in the greatest and most efficacious manner possible; in Him were all the treasures of wisdom and knowledge, graces gratis datae, virtues, and all other gifts foretold in the prophecies of Isaiah, and also signified in that miraculous dove which appeared at the Jordan, when Christ, by His baptism, consecrated its waters for a new sacrament. 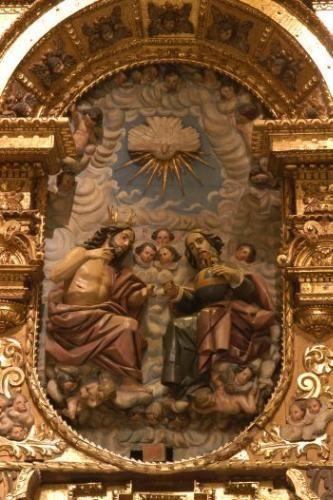 On this the words of St. Augustine may appropriately be quoted: “It would be absurd to say that Christ received the Holy Ghost when He was already thirty years of age, for He came to His baptism without sin, and therefore not without the Holy Ghost. At this time, then (that is, at His baptism), He was pleased to prefigure His Church, in which those especially who are baptized receive the Holy Ghost”. Therefore, by the conspicuous apparition of the Holy Ghost over Christ and by His invisible power in His soul, the twofold mission of the Spirit is foreshadowed, namely, His outward and visible mission in the Church, and His secret indwelling in the souls of the just.

There is no feast for each of the Divine Persons

Therefore Our predecessor Innocent XII, absolutely refused the petition of those who desired a special festival in honor of God the Father.

For, although the separate mysteries connected with the Incarnate Word are celebrated on certain fixed days, yet there is no special feast on which the Word is honored according to His Divine Nature alone. And even the Feast of Pentecost was instituted in the earliest times, not simply to honor the Holy Ghost in Himself, but to commemorate His coming, or His external mission.

And all this has been wisely ordained, lest from distinguishing the Persons men should be led to distinguish the Divine Essence. Moreover the Church, in order to preserve in her children the purity of faith, instituted the Feast of the Most Holy Trinity.

A solemnity for the One, Triune and Eternal God 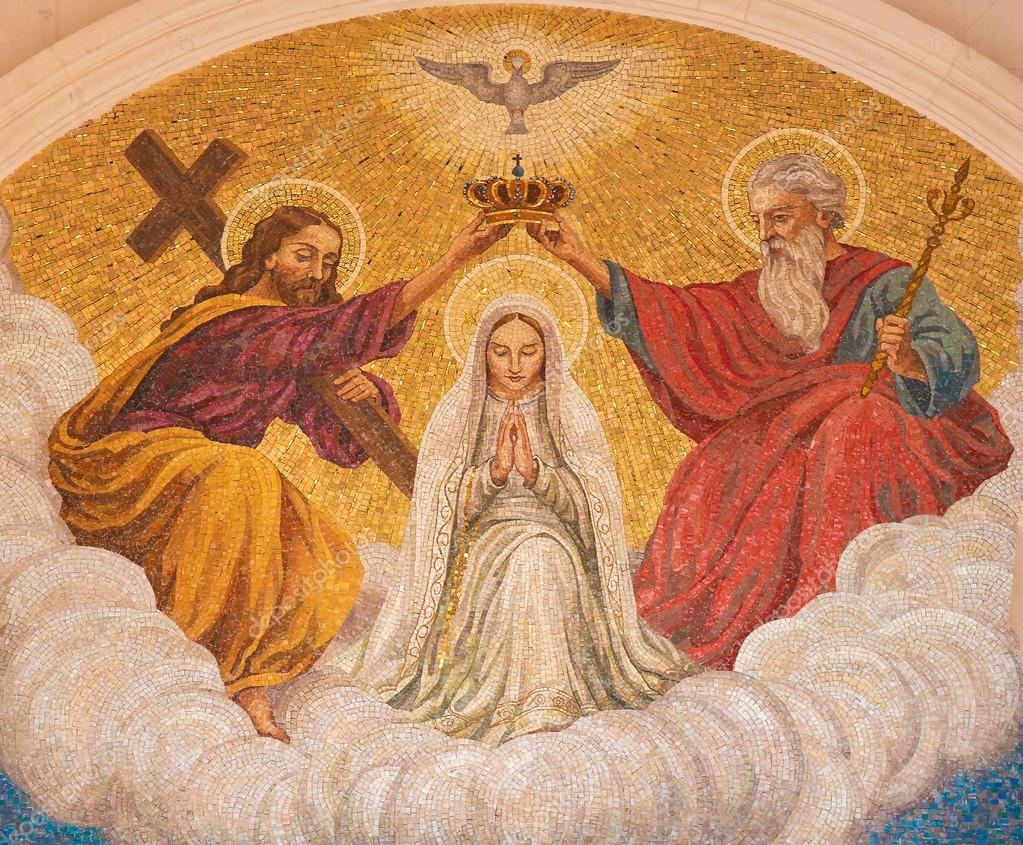 Centuries later, so that there was no doubt about the unity and Trinity of God, it was that the Church, reserving in her children the purity of the Faith, wanted to institute a feast especially dedicated to the Most Holy Trinity: Father, Son and Holy Spirit. A feast to revere, honor, adore, render glory to God, One, Triune and Eternal.

Pope John XXII established that this feast will be celebrated everywhere; He allowed temples and altars to dedicate themselves to this mystery and, after a heavenly vision, he approved a religious Order for the redemption of captives, in honor of the Most Holy Trinity, whose name distinguished her.

The worship paid to the saints and angels, to the Mother of God, and to Christ Himself, finally redounds to the honor of the Blessed Trinity. In prayers addressed to one Person, there is also mention of the others; in the litanies after the individual Persons have been separately invoked, a common invocation of all is added: all psalms and hymns conclude with the doxology to the Father, Son, and Holy Ghost; blessings, sacred rites, and sacraments are either accompanied or concluded by the invocation of the Blessed Trinity.