Blessed are the Pure of Heart 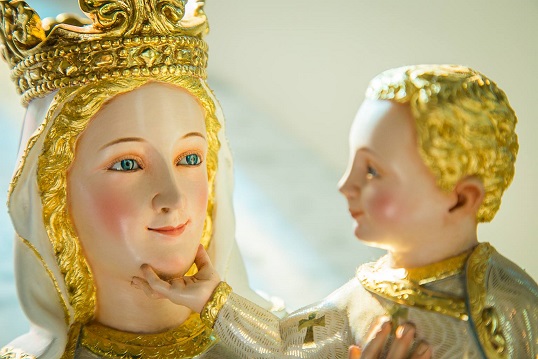 Peter trudged gloomily into the house. His attitude made his mother worry. What was happening with her little boy? A low mark at school? A misunderstanding between friends? Or could it have been a scolding from Fr. Anthony?

The day dawned bright and sunny in the village. The vineyards seemed to be loaded with precious stones instead of grapes as the sun streamed down on the dew drops that adorned them. The aroma of freshly baked bread wafted from kitchens, and through the windows little children could be seen getting ready for school. A few merchants peddled their wares through the lanes and some faithful souls stepped out of the church after the morning Mass.
Against this charming country backdrop, we enter a family home and catch an intriguing scrap of dialogue….
— Peter!
— Yes, Mommy?
— Are you ready for school? Is your altar server cassock in your bag?
— Yes! I just need to finish wrapping this big piece of cake… it’s not easy to do…
— Cake? Where are you taking the cake? Are you going to give it to someone? Your teacher, perhaps?
— No, Mommy, it’s a long story… I’ll arrive late at school if I explain it to you right now, but I promise to tell you all about it if my plan works out!

After dropping Peter off at school his mother, Emma, returned home, a little curious about the cake business… She did not suppose it was mischief or anything wrong, since her son was good and obedient and always an example to his friends. She thought that since he was new to that school, perhaps he wanted to surprise his teacher.

The day was pleasant and she took advantage of the fine weather to run her errands. However, loving mother that she was, as she went about her tasks she whispered a prayer to the Sacred Heart of Jesus, asking Him to keep her little one from all danger. She also placed him under the care of the Blessed Virgin.

At about four o’clock, she put away her work and stepped onto the balcony of the second floor of the home to look out for her son, who always walked home with a neighbor who worked at the school. He usually got home a little late, since he served the altar at Fr. Anthony’s Mass at St. Peter’s Church. And as soon as he stepped through the door, he would always run to hug his mother, and then enjoy the snack she had prepared for him.

Concerned, the good lady went down to meet her child. Had he received a low mark at school? Had there been a misunderstanding between friends? Or even worse, a scolding from Fr. Anthony?

As she got close to him, she could see that his face was wet with tears. He was crying.

— What about Fr. Anthony? Did he give you a scolding?

Emma remembered the cake that her son had taken to school and the “plan” that he had mentioned. She asked him:

— Did you bring the cake to Fr. Anthony? Did he like it?

— Yes, Mommy – the youngster said, choking back tears –, I gave him the cake. But still, my plan did not work! I thought that if he ate it he would not get hungry again…

— What do you mean, son? Is the priest in need of food?

— Let me try to explain… A few times when I have helped him at Mass I have seen him with a beautiful Boy in his hands, – a really, really beautiful Boy, in place of the Host, at the moment of the Consecration. Afterwards the little Boy becomes very small and hides inside the Host that the priest puts in his mouth! Mommy, I think the priest must be hungry, since he receives the Host even with the little boy inside of it! So that’s why I brought the cake to him!

Emma did not know whether to laugh or cry. Suddenly she understood everything…

— Today, he stopped by the school at recess – continued Peter – and I went running to give him the cake saying that it was the best cake in town, in order to make him want to try it. And he did! He said that he liked it a lot, and that it was delicious. That’s why I was so surprised when the same thing happened again at Mass!

Peter’s mother knew that Fr. Anthony was virtuous and holy, and, deeply touched by this supernatural favor, she said to her son:

— Don’t worry, son, the little boy in the Host is the Child Jesus! Everyone who goes to Communion receives Him as food so that He can transform us and sanctify us. That’s why you have started taking catechism lessons, in order to prepare to receive Him into your heart. You ought to thank God and your Guardian Angel for giving you the very special grace of seeing the Child Jesus!

Little Peter was flabbergasted. He was so excited with the thought of going to Mass the next morning that he was barely able to sleep a wink!

Naturally, he served at the altar with even more piety and attention, eagerly hoping to once again see the “beautiful Boy” whom he now knew was God!

What joy! At the moment of the Consecration the miracle was renewed before his innocent eyes. Filled with veneration, Peter thanked Jesus for such a great favor and bowed his head to adore Him.

The Holy Infant, turned to Peter and solemnly blessed him, saying in a childlike yet majestic voice: “Blessed are the pure in heart, for they shall see God (Mt 5:8).