The Bridge of Confidence 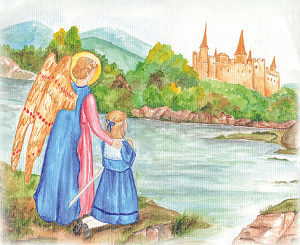 In a village in the French Alps lived a virtuous girl named Madeleine. Every afternoon she made her way to the neighborhood chapel to ask Our Lady for special graces, for she wanted to do something grand and glorious. She knelt before the beautiful statue of the Mother of God that adorned the main altar, and wondered, in the serenity of her innocent heart, how her longings could be fulfilled, for she was just a simple peasant girl.

Every Saturday morning, she had a class with a pious woman named Mistress Olga, who taught catechism to the children of the hamlet. One day, the topic was especially interesting;the teacher told them various stories of heroines from across history including Judith, Esther, St. Helen, and the beloved patroness of France, St. Joan of Arc. As can be imaged, Madeleine was filled with enthusiasm as she heard these narratives, for she dreamed of going off and fighting for God as they had.

A week later, when the girl was praying in the chapel, she saw, to her surprise and delight, her Guardian Angel beside the altar! A bright silvery light surrounded him and he carried a shining sword. In a kindly voice, he said to her:
— Madeleine, God has heard your entreaties and has sent me here to give you this sword, a symbol of your mission! If you want to be a true heroine, get ready to cross the forest with it. On the other side, you will find the golden castle where the Queen awaits you!. Then he disappeared.

Elated with the magnificent apparition, Madeleine took the sword and started out towards home. However, as the villagers saw her pass by they started whispering to one another, commenting that she was not strong enough to handle such a heavy object, or even to hold on to it for much longer… But she paid them no heed. Her soul burned with the desire to find the golden castle promised by the Angel, and if it were necessary to carry that sword until she reached it, she was willing to take it to the end.

For the next few weeks, Madeleine enjoyed the great privilege of seeing her Guardian Angel every day and he stimulated her desire to set off in search of the castle. In one of these blessed conversations, while the little girl picked strawberries in the woods, a hungry wolf crept out from among the trees, and advanced toward her. Without a moment’s delay, she took up the sword and defended herself courageously, finally dealing a deadly blow to the beast.

The next day, the whole hamlet gathered in the village square to pay tribute to a famous hunter of those regions. He had dragged from the forest the carcass of the wolf that had been the terror of the town, and now he regaled them with a gripping tale of how he had killed it. Madeleine listened in silence…

Spring arrived, and one breezy morning as she left her home in the company of her Guardian Angel, he asked her:
— Are you ready to set out to the golden castle today?
— Yes, I am – she responded.
— Then follow me! – ordered the Angel.

And away they went. Upon drawing close to a tree that marked the beginning of a path, the girl saw a sign upon which was written: “Of all of those who were bold enough to set foot on this path, none of them have returned to tell what they saw.”
— This is the way – the Angel assured her.

Undaunted Madeleine entered the foreboding trail straightaway. But as soon as she had taken her first few steps, her heavenly protector disappeared…

She knew she had to carry on, and that is what she did! She met up with all kinds of obstacles, difficulties and challenges: there were wild beasts that wanted to devour her, tangled vines that barred her path and even a steep
rock face that would have disheartened an experienced mountaineer… However, the little girl boldly continued the ascent.

After reaching the top, she stopped for a moment to catch her breath, and, seated on a stone, she thought to herself: “Will I actually reach the golden castle and encounter the Queen? Was this all just an illusion? Where is the Angel that accompanied me? Why did he abandon me? Would it not be better for me to return home?

Remembering the promise, however, she recovered her energy and courage, stood up, and carried on. Actually, it was her Angel, at her side, who gave her renewed strength, although she could not see him.

At a certain point along the way, Madeleine spied a golden tower, above the leafy dome of trees. She was certain it was the castle! She started to run swiftly towards it, when…
— Oh, no! It can’t be true! – she exclaimed.

She was only a few metres away from her aspired goal, but between her and the golden castle was a mighty river with dark and raging waters! She neared the bank with the thought of swimming across, but she soon saw that it was full of piranhas and crocodiles. It would be impossible to set foot in that river! Before reaching the other side, she would have to kill all the menacing water creatures, which would be even more impossible than swimming among them. What was to be done?

Madeleine knelt down and started to pray, beseeching the aid of the Mother of God with the certainty that she would be heard. Just then, she saw a host of colourful and radiant heavenly spirits descending from the heavens and beginning to build a beautiful bridge. When they had finished their work, an Angel arrayed in a lilac hue approached with a smile, took her by the hand and led her to the other side.

It was thus that Madeleine was able to reach the castle, where, in fact, a Queen awaited her with open arms. When she saw the sovereign, she fell to her knees, expressing her desire to enter her service. The Queen responded:
— My little daughter, this is the attitude that one should have before all of the circumstances of life. In order to reach the Heavenly Palace, one must fight without respite and without fear, but sometimes this will not be enough. Unsolvable problems will arise, situations with no way out. In these cases, it will be necessary to pray to Me. I will send my Angels to construct the magnificent bridge of confidence that will lead you to my Wise and Immaculate Heart!