The Reward for a Humble Failure. 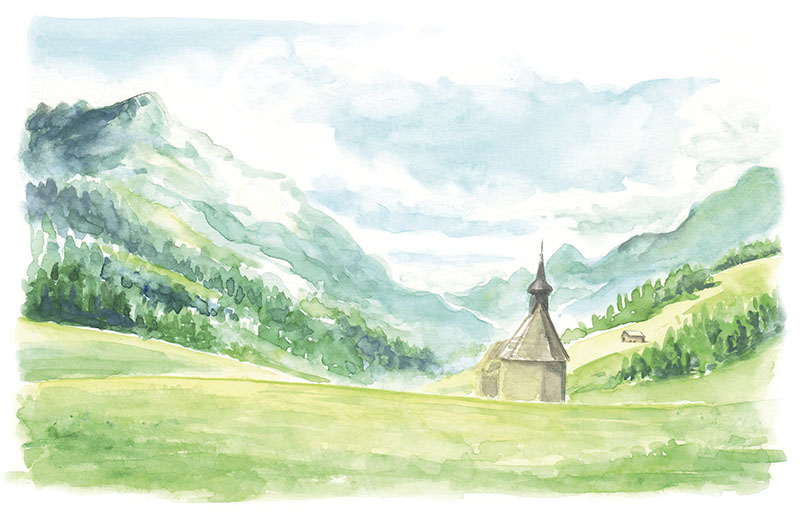 Standing before the queen, Tobias took a deep breath and began to sing… But he only made one mistake after another! Downcast, took refuge in his mother’s arms and began to weep.

Once upon a time, in a faraway place, there was a beautiful kingdom in a mountainous region, with high peaks and deep valleys. The mild climate helped the people to have a peaceful and serene state of soul; and the murmuring of the streams seemed to sing their simplicity, innocence and piety.

In this land there lived a lady who, on account of her virtue, was considered to be a saint by all. She had a generous heart, and her greatest desire was to have children to whom she could dedicate all of her goodness and kindness. After a long wait, Providence finally granted her request. However, the gift that she received from Heaven was also marked with sorrow: the son she had so long awaited was born blind.

Baptized with the name of Tobias, the boy soon learned to resign himself to the privations that come with blindness and to offer up all his difficulties as a sacrifice to God. He also became accustomed to relying on his mother’s unfailing aid, just as Tobit’s son relied, during his long journey, on the protection of Archangel St. Raphael (cf. Tb 5:4-22).

With loving care, his mother tried to provide him with some diversion or activity to occupy him at all times. While preparing the family dinner, she would sing charming melodies, and Tobias, who loved music, would listen with rapt attention. One day, as she began to hum a cheerful tune, the boy approached, saying:

“What a beautiful song, Mother! I want to sing like you.”

“Well then, son, stay here and I’ll teach you some songs.”

As Tobias could not read, his mother patiently repeated each line of the song, slowly pronouncing each word until the boy learned every verse, and every note of the melody. This soon became the child’s favourite pastime!

But Tobias was not content to sing alone. When he was with other children, he always tried to teach them the songs he had learned, so that his little friends could share in the joy that music gave him.

His mother was very satisfied to see how much her son enjoyed her music lessons. She realized that that if it were not for her motherly diligence, he would never have learned to sing so well, and she was happy to be able to help him do something that he could not do for himself.

One day, hearing that the queen would pay a visit to the neighbouring town, she decided to join a convoy of nobles and villagers who wished to meet their sovereign and present her with some gifts.

“But what will I offer on behalf of our family?” she thought.

She wished to honour her with what she most valued in the world. Of all that she had, what could she give? What would impart joy to the heart of such a wonderful queen? While she was absorbed in such thoughts, she heard a clear little voice ringing out in the garden.

Then calling for Tobias, she said:

“My little son, how would you like to sing your songs for our queen?”

“Me? But mother, I don’t sing well enough!” replied the boy, much abashed.

“Have no fear, my dear. I will help you, and you will do very well!”

With words such as these, she inspired the child with confidence, and he was persuaded to accept his mother’s invitation.

After several days of practice and preparation, the long-awaited moment arrived.

The queen was seated on a beautiful throne, willing to attend all those who wished to approach her. She was exceedingly regal, but she shone even more for her benevolence. It seemed that she saw each person, from the most distinguished marquis to the humblest peasant, as if they were her only subject.

Coming before her, Tobias bowed deeply, overcome with awe. Then his mother spoke the following words to the sovereign:

“Most gracious Queen, it was my desire to give you the best that I had. So I taught my son Tobias some songs that we hope will please you. He, though blind from birth, devoted extra time to learning them, as a token of our love and gratitude.” 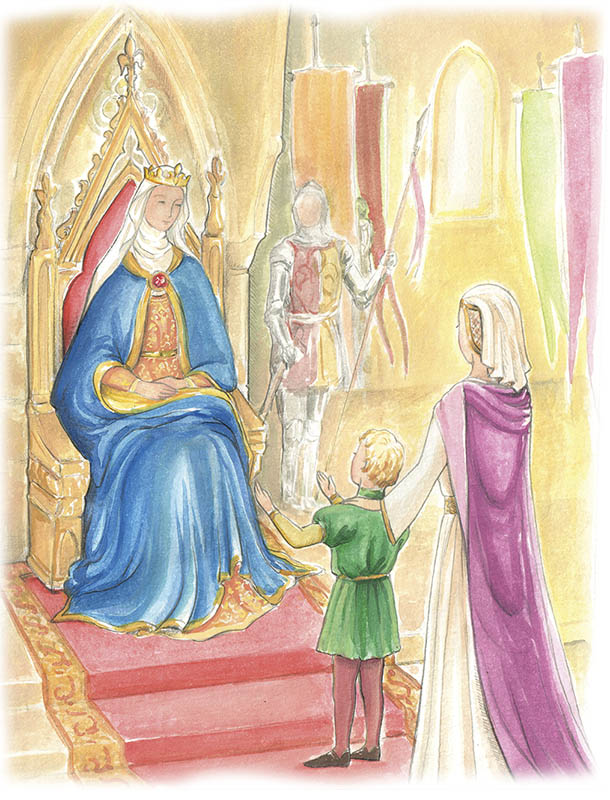 Her Majesty nodded with a smile. Then, to encourage and reassure her son, his mother said:

And little Tobias, taking a deep breath, began to sing.

His heart seemed to rise in his throat. He had never been so nervous! Soon, he began to stammer and sing off key, forgetting not only the lyrics, but also the melody. Even so, he did not give up and tried to correct his mistakes, but the situation only worsened. His performance was decidedly a failure.

After floundering through three songs, Tobias didn’t know what more to do. Imagining that he had spoiled the entire occasion with his singing, he threw himself into his mother’s arms, weeping profusely and asking her forgiveness.

However, he had not realized that, while he was singing – or rather, trying to sing – the queen had been deeply touched, and her smile was one of tenderness and compassion. From his refuge, the boy heard a gentle voice calling to him:

“Do not worry, Tobias, please come here! I am very pleased with your song!”

The queen, enchanted with the innocence of soul of the little blind boy who presented himself to her, held out her hand to him and spoke to him words of solace and affection, and then enfolded him in her arms.

As Tobias felt himself embraced by his sovereign, he perceived that something was changing in him. Inspired, he lifted his eyes, suddenly wishing to see the queen’s face. And, wonder of wonders, at that instant he began to see! The first sight that his eyes ever beheld became forever engraved in his heart: the loving gaze of his queen.

Each one of us can draw a lesson from this story: we must never be discouraged by our faults and shortcomings. Is there anyone who does not have some kind of blindness to be cured by Our Lady? Our weakness does not repel Her, our mistakes do not astonish Her; rather, they move her maternal Heart and draw her gaze upon us, full of tenderness and compassion.

Let us never separate ourselves from Her, for by taking us into her virginal arms, She can heal us from every ill!