Whose Grandeur was Greater? 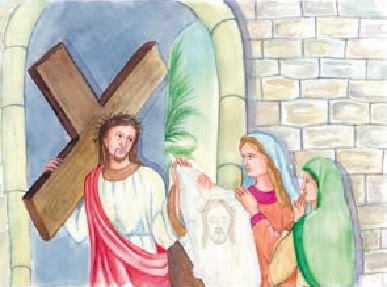 Around the year of Our Lord 33, there lived a woman named Sarah, renowned for her special skill: she crafted textiles of every kind, from simple veils to rich brocades embellished with golden and silver threads and precious stones.

Her work was famous throughout all the villages of Judea, and people eagerly flocked to the market near the Temple of Jerusalem where she displayed her goods. But despite the high demand for her products, the artisan never had a large supply to offer, since each piece required painstaking labour and she did not want them to lose their due value.

That week she had only four fabrics to display: the first was of a green turquoise hue, with a golden border. The second was a rare gold silk, adored with purple; the third was a red taffeta of a delicate texture; the last was a noble yet inconspicuous piece of white linen.

Before sunrise, the vendors had set up their booths, in anticipation of early buyers. As the textiles waited, they began to talk among themselves:

— Oh, turquoise! Look at my
magnificent purple accents! I deserve to belong to the nobility! The Queen of Sheba herself would be delighted with me! – said the gold fabric.

— And did you not notice my brilliant sheen and my lively colour? I would be fit to adorn not just a queen, but even the Temple itself! -exclaimed the red.

— My friends, your worth is great, but you pale in comparison with my unique colour and my beautiful golden border. Wait and see which of us is destined to stand out the most – added the turquoise piece, smug in its finery.

Off to the side, the pure white cloth quietly reflected: “Indeed they really are beautiful! However, could God be pleased to see them in this state, filled with vanity and pride?”.

The clients started to arrive. The gold fabric soon caught the eye of a servant of the Roman governor:

— Greetings Sarah! My master, the governor, has heard of your talent, and was so impressed that he wants to give one of your pieces to Caesar. May I take this one?

— Why of course! Naturally there is a price to pay…

Off went the gold piece,proudly thinking of the admiration that it would certainly receive from the emperor.

Another buyer appeared at Sarah’s booth:

— I have saved hard to have enough to buy one of these rare textiles, in order to embellish my home. This red piece really takes my fancy!

The customer handed over the hefty price that the merchant requested and took the item. That piece of fabric went away disappointed. Its destiny was not so grandiose after all…

— Sarah, I am searching for some cloth to decorate my palace. I want a striking piece… Oh! I just love that green turquoise! May I take it?

— Yes, if you pay me double, since several people are bidding for it.

The purchase was made. Off went the turquoise, dreaming of the attention it would attract in the palace, and the praise that it would receive from visitors.

No passers-by showed any interest in the linen. Sarah decided to take it off the stand in order to embroider it and display it the next time. She dismissed the rest of the clientele.

While some turned away disappointed and others mumbled their annoyance, Ruth, an old friend of the artisan, arrived at the stand urgently requesting a piece of cloth. The seamstress offered her regrets:

— My friend, unfortunately I have nothing of great value. Everything is sold out.

— Oh, Sarah, I would be satisfied with anything at all! I want to give a gift to a lady whom I met during the preaching of the Master who has enchanted everyone around Jerusalem with His words.

— Is that so? Could He be related to Simeon the prophet? Anyhow, I have only one piece left. It is plain white, but very fine linen. I do not think it is what you are looking for, but you may have it free of charge if you wish.

Ruth eagerly took the piece and went her way. The white fabric thought to itself: “God has heard my prayers; at least I will be of use to someone. However, will my future owner stow me away in a chest and forget about me? May God’s will be done. If only I could see that extraordinary Man preach…”

The next day, a Friday, Ruth set out early to visit her friend:

— Veronica, I want to give you this piece of cloth as a sign of our friendship. It is one of the pieces made by the famous craftswoman Sarah.

— O Ruth, I thank you from my heart. What a fine piece of linen. I would like to invite you in for a little visit, but just now I was on my way out in the hope of finding the Master, for I heard that He is close by. Do you wish to join me?

With hasty steps, the pair departed. In her excitement, Ruth failed to notice that Veronica’s expression was a little tense due to a feeling of foreboding that weighed on her heart. As they walked along, they
soon heard a cry:

A tumultuous throng was leaving the city. Alarmed, they both ran to see who was being treated so brutishly. It was He whom Veronica had seen preaching and doing good to others; It was Jesus, Son of Mary.

When she saw Him all wounded and bloody, crowned with thorns, and carrying a heavy Cross, Veronica’s heart burned with the desire to comfort Him in some way. Without thinking twice, she ran to Him and delicately wiped His Holy Face with the cloth that she had just received. The grateful gaze of the Saviour rested on her, and in those fleeting moments, she understood Him better than she ever had in all of His sermons.

As the Divine Master slowly withdrew and continued along His sorrowful way, she noticed with great surprise that His face was imprinted on the linen! And what joy the humble cloth felt now! What were all of the riches and the honours of the world compared with having the Sacred Face of Jesus imprinted on oneself?

As its pure white fibres caressed that disfigured face, the linen cloth was transformed into a most valuable relic, a perfect image of God Himself. It then understood that there is no greater glory on this earth than that of being associated with the sufferings of the Redeemer.