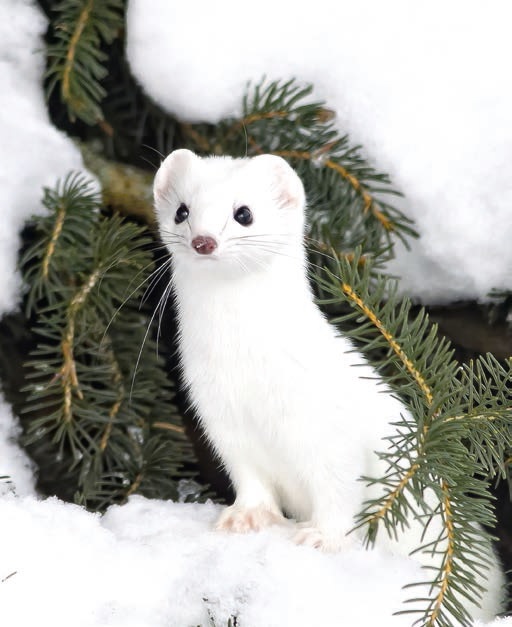 If we focus closely on the rugged landscapes of the Arctic regions, we might catch a glimpse of an enchanting creature which, due to its colour and size, could easily go unnoticed – the ermine.

Slender, agile, and small for a mammal (the largest are a little less than thirty centimetres long), the colour of its silky coat helps it to hide from predators. During the summer, it has a chestnut hue that blends well with its habitat, but in autumn and winter, it changes to an immaculate white. Were it not for the characteristic black-tipped tail that gives it away as it darts about, the ermine would be invisible against the snow.

When viewed amid its frosty surroundings, one would wager that this little creature had “fled” from Paradise, for its whiteness and gracefulness do not seem to match with the things of this earth. And that is why it is considered the symbol of purity, worthy of being depicted as such on the noblest coats of arms. Its fur also adorns the mantles of Popes, Cardinals and kings.

Such refined symbolism, coupled with the untiring combativeness of this tiny creature which is capable of capturing prey ten times its size, evokes the exhortation of Our Lord: “So be wise as serpents and innocent as doves” (cf.Mt 10:16). In fact, the harmonious connection between readiness and candour, sagacity and purity belies the idea so generalized today that innocence is synonymous with naivety and apathy.

“Malo mori quam foedari – Death before Dishonour.” The classic Latin adage, inscribed on so many coats of arms of cities and traditional families, is usually linked with the ermine. It is said that when this agile little animal is pursued by a hunter and the latter manages to encircle it with mud, it chooses to surrender its life rather than dirty itself. Upright souls act likewise. When they find themselves in situations in which they may become tarnished, they prefer death rather than to wallow in the mire of sin.

Would that we, like the ermine, never allow our soul to be marred with the least stain of sin or complicity with the spirit of the world, which is so opposed to Him by whom and for whom we were created. And that, with His grace, we may succeed in uniting purity and combativeness!

However, if we have fallen into the misfortune of staining ourselves, let us turn to Our Lady, Refuge of Sinners. Since She is the omnipotent supplicant, a simple gesture from Her can cleanse us of the effects of any fault, and even instantly transform us into that son or daughter without stain which we would have been had we never sinned.

Let us admire the purity and combativeness that the Creator has placed in the ermine. And let recognize in it that sagacity and innocence so loved by God, aware that these qualities are but pale reflections of the divine perfections that we are called to imitate.